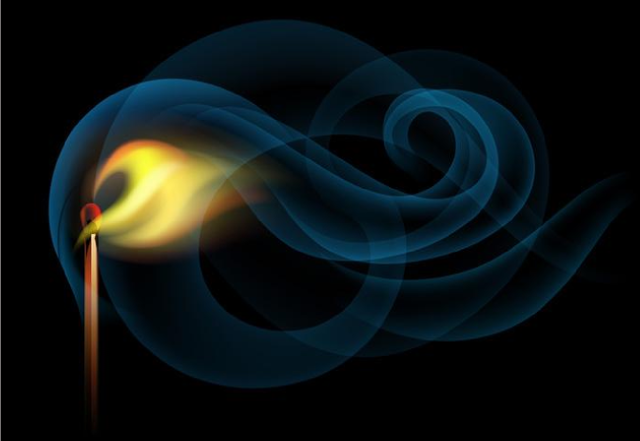 When my children were young, I learned that sometimes you literally have to have a fire lit under you to appreciate how dear those close to you are.

We moved to the country looking for a safer, less stressful life for ourselves and our two young children. Our rural Minnesota house sat well back from the road. There was ample room for Nicki, our three-year old, and Lance, our six year old, to play safely on the five acre plot of land that surrounded our house.

One warm summer morning the kids were watching an old episode of Little House on the Prairie, “Barn Burner”. After it was over, they asked if they could go outside and play.

“Sure,” I said. It was my intention to go out and work in our garden anyway. I just had a few dishes to wash up first. As I was washing the dishes, suddenly I saw a dust devil at the end of the barn. It was the first one I had ever seen close up. It looked like a very tiny tornado. It swirled for a few moments and then it was gone.

Just as I was turning my attention back to the soapy dishwater, another dust devil caught my eye. It was almost a twin to the first one: in the same spot, the same size, and lasting about as long. Although I was new to dust devils, I had heard that lightning doesn’t strike twice in the same place and I was pretty sure that dust devils didn’t either. I thought maybe I should go outside and check on the kids.

When calling the kids didn’t get a response, I decided to look for them in the out buildings, starting with the barn. Our barn was full-sized, but empty except for a few hay bales the previous owners had left behind. As I walked towards the barn, I saw another wisp of gray drifting out of the barn door and I smelled an odd smell. Was something burning?

My heart started beating faster as suddenly I realized that the dust devils I had seen from my kitchen window were more likely smoke.

As I sprinted to the barn, I began calling for Lance and Nicki, but no answer. As I walked through the barn door, my fear was realized. There, in the middle of the floor, was a smoldering pile of hay. Yellow fingers of flame were just starting to push their way through the pile and I could see the smoke was becoming denser as it wisped to the open window.

My children were nowhere in sight. I had to find them--be sure they were safe--but I also had another hard decision to make. I had to get the fire out one way or another.

I decided that the better, more immediate choice was to try to put out the fire on my own. We didn’t have a hose long enough to reach the barn so it would have to be with buckets.

By now, my calls to the kids must have sounded frantic, but they still didn’t elicit any response. As I got to the back door, much to my surprise Lance and Nicki were on their way out again and even though it was a warm day, they both had put on their winter parkas. Their coat pockets were stuffed with matches. My 3-year-old daughter and 6-year-old son had started the fire and they were on their way back to the barn to make it bigger!

I barked at them to take their coats off and go sit in the living room until I came back in.

Luckily, I was able to snuff out the fire with four trips back and forth from the house water spigot to the barn. The first bucket drenched the fire, but I just wanted to make sure it was out for good. After the fourth bucket, I stirred it and saw no sign of smoke or embers. I went back inside to face my two wayward children.

The mixture of emotions coursing through me was bizarre. Still shaken from the whole experience, relief that my children were unscathed washed over me as I realized how badly they could have been injured.

Even though, I was kicking myself for not keeping the matches out of their reach I was still trembling with anger. They had betrayed our trust. They knew they were not supposed to play with matches. I was so angry that I was almost speechless! That was good because I didn’t trust myself to start scolding them. Instead, I told my children that I was going to go out and work in the garden, that they had better sit in front of that television and not move until I came back in. Neither of them answered a single word. It was, by then, about 11:30 a.m.

As I weeded row after row of vegetables, I began to calm down. After some time, I heard Nicki’s quiet little voice behind me.

“Mama... Mama?” I turned around to look at my little daughter. “Lance wants to know if we can make some peanut butter samwiches.”

I looked at my watch. It was 2:00 p.m. Suddenly I felt very guilty for the anger that had made me forget their lunch and very grateful that I had these two beautiful, healthy children. I hugged my little girl close and said, “Sure. Let’s go in. I’ll help.”

We never knew exactly why they started the fire, what they expected would happen. Although we were never sure if they got the idea from the television program, we learned to pay attention to what our children watched on television, that even “safe” television shows might benefit from discussion and/or an adult explanation. We also kept the matches in a locked container, high out of their reach.