Author's Note: Based on the true story of a hunter, a dog, a pig, and a toboggan, exaggerated and embellished for this telling. 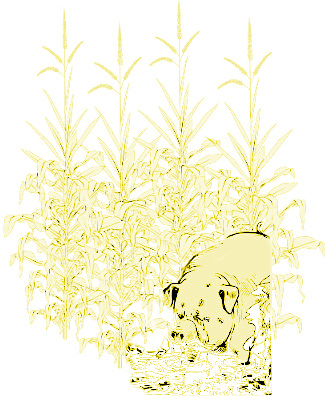 Jack and Beverly LaPont had escaped the confines of the city for life in the country. Behind their small farm was a slough that  the Johnson’s cornfield bordered on the south end of the LaPont property.

The Johnsons were the LaPont’s closest neighbors and living near them was always an adventure. The Johnsons loved animals. They lived on five acres that overflowed with their menagerie.

Seven dogs shared the small house with the family of five. Outside, they kept a stable of five horses. Their chicken population flourished because they didn’t have the heart to butcher the birds. Roosters crowed from dawn until dusk as each one made sure he was heard over his rivals. Their final and newest acquisition was a gestating sow.

It was late winter when the sow gave birth to a litter. The runt was born crippled and when its mother rejected it, Maave Johnson stepped in and rescued the little piglet. She bottle-fed it until it was weaned. Worried that the other pigs might attack their deformed sibling, the Johnsons kept the youngster in their yard during the day. Although the pig’s crippled legs kept if from running too fast, one day in early summer he disappeared. Although they searched the countryside for him, the Johnsons couldn’t find him. They figured they had seen the last of the little piglet.

Jack LaPont eagerly anticipated the opening day of pheasant season, October 16, his first chance to hunt on his own land. But as the saying goes, “the best laid plans of mice and men often go awry.” On October 15, autumn ended early and the area met with the first blizzard of a winter that would become the worst Minnesota winter in 30 years. The snow was still falling on the 16th, but undaunted, Jack put on his hunting garb and he and his golden lab set out to hunt the slough. There were no pheasants in the slough. The heavy snow had driven them to seek shelter in the cornfield.

As Jack approached the edge of the cornfield, he heard his dog barking and a squealing such as he had never before heard!  The squealer was the Johnson’s crippled pig!  It was no longer a little piglet.  Its sojourn in the cornfield had let it eat until its heart’s content and it had developed into a massive boar. It was one of the biggest pigs Jack had ever seen! Because its hind legs had never matured, only its front legs had developed strength. They pulled the pig’s girth along in a gait that resembled something between a stumbling walk and a crawl. There was no way this pig would get out of the cornfield on its own!

Jack leashed his dog and the pair trudged back through several inches of the new fallen, still falling snow. The wind was up and temperatures were rapidly declining. If the Johnson’s opted to save the pig, they would need to move fast. Although the pig had survived the summer, that he would survive the blizzard and the impending sub-zero temperatures was doubtful.

The walk that had taken  minutes, seemed like hours on the way home.  Finally, Jack opened the door. The aroma of fresh-brewed coffee and fresh-baked cookies greeted him. On hearing the door shut, Beverly walked into the kitchen. “Give up on hunting?” she asked.

“You mean that crippled piglet? Is it dead?”

“No, it’s very much alive and has grown into the biggest pig I’ve ever seen!”

“That’s saying something, considering you grew up on a farm. Where is it?”

“It’s in the Johnson’s cornfield. I’ll fill you in on the details later. Right now I need to let the Johnson’s know I’ve found it and see what they want to do about it.” A  phone call to the Johnson’s confirmed that they wanted to rescue their pig but, it was  too hazardous to drive and the pig was too heavy to carry. But, the Johnsons came up with a plan.

Soon the Johnson family was at the LaPont house: Arlen, Maave, and their three children, who rode gleefully on a large, saucer-shaped toboggan. Jack grabbed his coat and went out to meet them.

“Hey, Arlen. Helluva snowstorm. Let's leave the kids here. It’s a hard walk through the slough in this deep snow.  If we can find him again, the three of us should be able to load him on your sled. Besides, my kids could use the company and,” he smiled, “Bev’s just finished baking cookies.”

“Thanks,” said Arlen. “Didn’t have to ask the kids twice.” He grinned as he gestured towards his kids who were already going through the LaPont’s door. “Do you think we’ll be able to find Porky? The snow will have covered your tracks by now.”

“I didn’t find him the first time, my dog Harley did. If we take him along, he’ll be able to find him again.” Seeing the worry in Maave’s face, he added, “Harley won’t hurt the pig. He just barked at him before. I’m sure that’s all he’ll do when he finds it again.”

Jack couldn’t decide whether it was more difficult going up the hill from the slough or down the hill to it. The snow was still falling fast and hard. Snow that had covered his boot tops on the way home was now ankle deep on the slippery hillside. At least the wind was dying down.

Harley was the happiest of the three. A hunting dog at heart, this was a holiday. Two outings on the same day! Yet, the moment the small party arrived at the slough, it was as if he knew what his purpose was. The dog went bounding into the cornfield and in just moments Jack and the Johnson’s could hear the barking and squealing.

“Good dog!” Jack's voice was full of pride in the dog.

"Yes he is!" Harlen agreed, but Maave's full attention was directed to the pig. "Oh Porky, look at you! What have you been eating? You are huge!”

As if the big boar remembered her, his panicked squeals quickly faded to quiet, contented grunts.

"I'd say he was corn fed," said Jack pointing to the tall stalks of unharvested corn.

Maave and Jack held up the pig’s rear while Arlen shoved the toboggan under it. Arlen had also jerry-rigged an a-strap to keep the large animal from slipping out the back on the trek up the hill. Maave and Jack both grabbed the rope to pull the pig along as Arlen stayed behind to be sure the t-strap held.

The snow had stopped sometime between finding the pig and pulling it out of the cornfield. The sky was clearing, but the winter sun was already sinking low into the western sky. As they breached the hill, Jack wondered if Bev or the kids were looking out the window. He was sure their party must be quite a comical sight: a dog frolicking in the snow while three weary adults pulled a pig on a toboggan.

The LaPonts were lucky if they made it to town and back for most of that snowy winter. They didn’t see the Johnsons again until spring. When next he encountered Arlen, Jack asked what had become of the pig. Arlen told him that soon after the rescue, the pig had developed pneumonia and died. Maave insisted that they bury “Porky” in the cornfield.