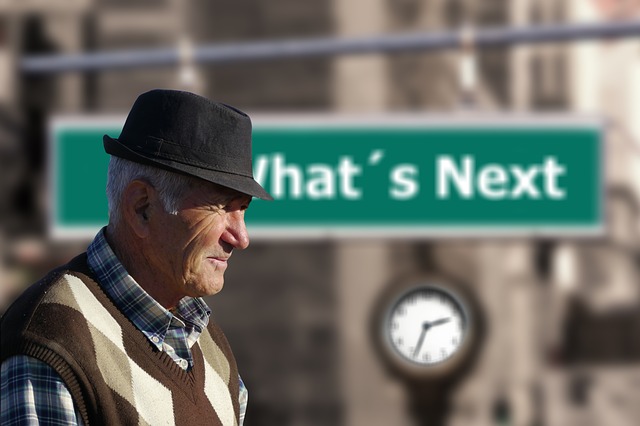 As my mother stood at the kitchen sink doing dishes, she looked out of the west-facing window and saw her 76-year-old husband up on the neighbor’s roof. Mother gasped in a sound that stopped just short of a scream. She dropped the plate in her hand back into the dishwater, grabbed the dish towel, and walked into the living room. She sat down in her rocker and waited for my dad to come home.

Several hours later, as he came through the door, she read him the riot act. “I can’t stop you from getting on top of a roof. But, if you insist on risking your life, tell me ahead of time so I don’t see it.”

“Halvorsen asked me to help him re-roof his house,” Dad said. Dad often offered a helping hand to our neighbors, and carpentry was just one of his many talents. He was a school bus driver, a janitor, a gardener/landscaper,  a substitute mail carrier, and a carpenter. He was a jack-of-all-trades, but he was a master of each one.

Sometimes I wonder if the disease first touched him on that day. Most often, Alzheimer’s symptoms first appear in a person’s mid-60s. Had we missed some instances or was Mom making something out of nothing?

When it began doesn’t matter, though. In time, Alzheimer’s would strip away every facet of Dad’s life, just as it does to millions of Americans. Experts estimate that this insidious disease afflicts over 5.5 million Americans.1 Science hasn’t yet found what causes Alzheimer’s or how to stop it, although present research has exposed some ways to slow the disease down.

We all have these instant lapses. We laugh and call them “Senior Moments” and sometimes, that’s all they are. But they can signal the onset of Alzheimer’s and there is no way to differentiate between them. Are we experiencing a momentary lapse or is it the terrifying beginning of letter by letter, misplaced word by word, losing one’s mind.

Alzheimer’s is the most common cause of dementia in the elderly, but it can strike younger people. An approximate 200,000 Americans, under the age of 65, have younger or early onset Alzheimer’s.2

As Alzheimer’s Disease progresses, it leaves little doubt in anyone’s mind that there is a definite problem. My dad was my stepfather. He and I never shared a father-daughter closeness. For over a decade, I believed that he disliked me as much as I disliked him. We seldom spoke beyond what passed for civil. That’s why one of our last conversations seems so memorable. I was an adult by then, and Dad was in his early 80s. During a visit one day, Dad came and sat down across from me. He leaned forward and said, “I was so ashamed today, Linda.”

At that point, I snapped to attention. I had never heard my dad admit to any fault or mistake. “I found myself downtown,” he continued. “I looked down at my feet and I was still wearing my bedroom slippers.”

That’s all he said. I don’t remember if I even replied. He got up and went upstairs. In that instant,  two decades of anger evaporated. For the first time, instead of the step-dad, I observed the man. My heart broke for him. His fear of losing his faculties was palpable. During lucid moments, it must have been horrible to remember those times when he was not.

Alzheimer’s is a cruel thief. It steals the past as well as the future. I watched my father’s eyes grow more and more distant as the disease progressed until he was somewhere so far away, I could only pray that he was content there. Patty Reagan3

When Dad was 86, he had some serious health problems that made it impossible for my mother to take care of him on her own. Besides physical problems, his periods of lucid consciousness had waned. He failed to recognize my mother, who had been his wife for 32 years. The last time I visited him, he confused me with a girl who had ridden his school bus decades ago. I wasn’t sorry that he no longer knew me. I remembered about the bedroom slippers and was grateful that he no longer had the embarrassment of lucidity in his life.