Epilepsy afflicts all types of dogs: pedigreed and unpapered, champions and chumps, alphas and omegas. That’s why I am really glad we knew Gracie. Her name did her justice. She was a dainty little charmer, a sweet Italian Greyhound who lived with my husband’s niece, Cindy. Gracie had epilepsy. If not for Cindy sharing Gracie’s condition with us, we may not have kept our dog Bailey. Even knowing about epilepsy, that first seizure — in fact, every seizure — is terrifying.

The proportion of epilepsy in the general dog population has been estimated between 0.5% to 5.7%. There are two main types of epilepsy: primary and secondary.

Primary epilepsy can be genetic or it can be idiopathic, meaning that it has no identifiable underlying cause. The three most important factors in the diagnosis of idiopathic epilepsy are 1) the age of the dog at the disease’s onset, 2) the type of seizures, and 3) their frequency.

Secondary epilepsy can result from several causes. Seizures may be caused by trauma, a toxin, a brain tumor, an infection, or an issue with your dog’s blood, kidneys, or other organs. 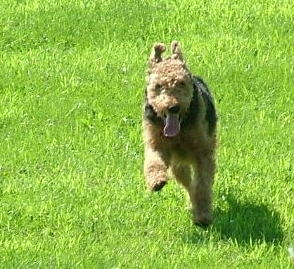 Born in mid-August 2005, we brought Bailey home in the beginning of October. He was a normal Airedale Terrier for the first 4 1/2 years. Like any addition to your family, there is no guarantee that a puppy will be born healthy or stay healthy throughout his life. That was the case with Bailey.

Idiopathic epilepsy often begins when a dog is between the ages of 6 months and 5 years old. Our Bailey’s seizures started in March 2012 when he was 4 1/2 years old.

Although there are several types of seizures, one of the scariest is the grand mal.

Though the physical manifestation of a grand mal seizure is unmistakable, it is often preceded by a reversal or marked change in a dog’s behavior, called the aura. The aura helps you note the first signs of an impending grand mal seizure.The most important part of helping your dog through a seizure is that you stay calm from beginning to end. During the aura, an affectionate dog may seem aloof and an aloof dog may suddenly seek extra attention. A dog may seem disoriented and restless. He may wander or he may run in circles. He may vomit or he may lose control of his bowels.

The convulsive stage of the grand mal seizure is called the ictus, During the grand mal seizure, many dogs will fall on their side and begin convulsing. The most terrifying part of Bailey’s seizures was that he would rear up on his hind legs and fall over backwards before the spasms started. Since he was almost five feet long, that was quite a drop. Paying attention to the first signs gave us a chance to push away any sharp or heavy objects that he might fall on. If there was time, we could get behind him to catch him, but the aura rarely lasted that long.

Some experts suggest covering your dog with a blanket, but we never did because Bailey didn’t like to be covered. We stood near him and talked to him quietly. We would say, “Stay with me, boy” and “Come back to us, Bailey”. I don’t know if it helped him, but it helped us keep calmer and more in control of an out-of-control situation.

In one video, a dog’s owner says she massages her dog through his seizures. That’s something we could never do comfortably because of the severity of his convulsions and the salivation and teeth gnashing. We can’t know what goes through the mind of a seizing dog and, aside from the danger of accidental bites, we felt it best to keep his stress level as low as possible.

We were fortunate that Bailey’s grand mal seizures lasted between 35 seconds to 90 seconds, even though each one felt like an eternity. Our vet gave us a vial of Valium to use if a seizure ever lasted longer than five minutes but we never needed to use it. Bailey’s seizures were less frequent than those of many other dogs. They ranged from two weeks to two months apart.

After the ictus has passed, your dog may experience the post ictus. During this time, he may be disoriented, temporarily blind, he may seem compulsive, nervous, overly hungry, or overly thirsty. Keep him as quiet as possible. Talk to him in a calm, reassuring voice. If you think he will trust you to pet him, do so. Bailey was usually temporarily blind for a couple of minutes during the post ictus. So we stroked him low on his back, keeping our hands out of danger in case he our touch startled him.

Full recovery from a grand mal seizure can be as short as 30 seconds or take as long as 24 hours. Bailey usually recovered within minutes of the end of the ictus. Often, he would become frisky and full of pep shortly after he regained his feet.

There are many types of seizures, and your dog may have more than one. We are sure that Bailey did. The types most often seen in dogs are:

Tonic-clonic: The tonic phase is the true onset of a grand mal seizure, where the animal first falls and stiffens his limbs. The clonic part is the actual convulsion and may include behaviors like paddling his limbs, salivating, gnashing his teeth, and loss of control over his bowels.

Psycho motor (Behavioral) Seizures: Behaviors your dog may exhibit during a Psycho motor seizure can include lip-smacking, chewing, fly biting, aggression, vocalization, hysterical running, cowering or hiding in otherwise normal situations. Unlike a grand mal seizure, your dog won’t lose consciousness during a psycho motor event.We have noticed hysterical running, cowering, fly-biting, and lip-smacking in Bailey from time to time. These may or may not be signs of a secondary form of epilepsy. While some of these behaviors can be caused by other stimulus, it’s important to note the frequency and duration of the behaviors as possible epileptic factors.

Status Epilepticus: A seizure that lasts for 30 minutes or more, or a series of multiple seizures in a short time with no return to normal consciousness.

We keep a log of Bailey’s seizures to track their duration, frequency, and any change in events.

The medical treatment for epilepsy is through one of several types of medication. Yet, there is some controversy over which types are safest and which types are most effective. Epilepsy is a serious disorder and one that should involve consultation with your veterinarian. Your vet knows your dog and is probably the best person to recommend the type of treatment that best suits your dog. However, several resources on the web can provide you with more details about epilepsy in dogs: