Reflection on the Larceny of Squirrels 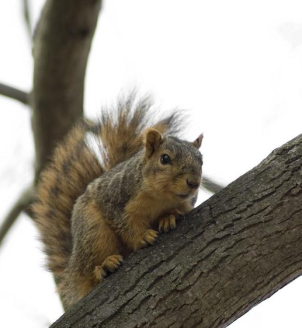 It is a common belief that squirrels forget where they bury nuts, but squirrels are also bandits that steal whatever they can find, either from you or from their neighbors.

One autumn day, I watched our neighbor’s resident squirrel raid the nest of one who had moved into our front yard tree. A few days later, the homesteader buried a cache of scavenged treasure on our boulevard. As soon as he left, his neighbor searched and pillaged the excavation. Then he re-buried the homesteader’s stash in another spot.

This episode of squirrel thievery brought to mind my first encounter with the larceny of squirrels. I think the squirrel’s criminal instincts are inborn. You can install a baffle to keep a squirrel out of your bird feeder, but you can’t baffle your walnut tree or your berry patch.

After several successful years of vegetable and flower gardening, I tried my green thumb at a strawberry patch. That first year, I did everything wrong from planting to pruning and, of course, it isn’t common for first year patches to produce a harvest. Totally frustrated, and not knowing that strawberries were biennial, I abandoned the patch, but the next spring I got a crop! One berry.

I watched that berry grow from a blossom to a berry bud. It grew and became a magnificent specimen. It grew as big as a golf ball before it began ripening. I watched it close, eager for the time when I would harvest the single berry from my first strawberry patch.

Finally, I decided I would let the berry ripen one more night. The next morning I swaggered over to my berry patch. My mouth watered in anticipation of a ripe, juicy strawberry. It was gone! Movement in the small tree near my garden caught my eye. There sat a squirrel with my berry between his paws. He nibbled at that berry, savoring its sweetness and turning it just a smidgen with each bite… like you or I would eat an apple. His look said, “Ha ha ha… I got the berry!”

I swear; he even smacked his lips! I felt my face redden, and I sputtered in protest, but then I saw the hilarity of the situation and I had to turn away. I didn’t want my belly laugh to startle the squirrel into dropping and wasting the berry. That afternoon, I went to the local garden shop and bought a book on growing strawberries, hoping that in subsequent years, both the squirrel and I could quench our strawberry craving.