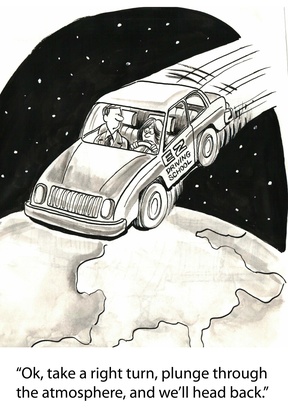 I learned how not to drive on a Sunday, but if you want a license you have to learn how to drive. In the end, that Sunday drive was almost easier for me!

Two of my classmates and I took driver's training together. Each of us took a turn at learning the various driving techniques. Seat belts were a relatively new contraption and they were only installed in the front seat of our vehicle. Still, our instructor was a stickler for wearing them. He wouldn't even let the driver insert the key in the ignition until she was buckled in.

It was maybe our second or third time out when our instructor explained that he was going to test us on our quick stop in the same way as the examiner would when we applied for our driver's licenses. We were to drive along normally and when he said, "Stop!" we were to immediately hit the brake.

The first girl took a couple tries before she was able to stop quickly enough to satisfy the instructor. The second had paid attention and her time in the driver's seat was short. I was next.

I was off to a poor start. Of course, I had inserted the key before I buckled my seat belt and had to be reminded. I drove down the residential street and just about the time I had accelerated to 30 MPH, a chihuahua tore into the street. My heart stopped for a moment as my foot tromped hard on the brake. The instructor, whom had not buckled his seatbelt, nearly flew into the windshield. "What are you doing! You could have killed me," he scolded.

"I didn't want to hit the dog. Besides, you didn't have your seatbelt on," I retorted. I was relieved of my spot in the driver's seat and I never did have to do a quick stop.

After I finished driver's training, I thought I was road-ready, but passing the behind-the-wheel driver's test turned out to be something like climbing Mt. Everest. It took me four tries to pass it. The first was not entirely due to poor driving.

My Mother had just purchased a brand new sub-compact car. That's what they called it, but actually it was little more than a tin can with seats.

It was the end of a very warm July. Looking back, I don't know how people managed to travel in the mid-60s without air-conditioning, but we did. The only thing that made the 30 mile trip tolerable was the wide-open windows.

The driver's licensing office was in the basement of an armory building. The cool, dimness was inviting. Unfortunately for my sweaty self, the examiner sent me back outside to wait in the car. He would be there in a minute. Twenty minutes later, the examiner appeared. I am sure our tiny vehicle was a disappointment to the full-size examiner. After he wedged himself into his seat, he turned and asked, "How are you today?"

I felt like I had been sitting in a toaster and I was ready to pop! "Damn hot!" I replied and I immediately knew it was the wrong thing to say. If I wasn't already aware of the errors of my ways, the examiner was making them clear. He was marking the fail column of my test in warp speed.

I was in much better humor the day of my second test and it went much better until I knocked over the red flag while trying to parallel park. That was an immediate fail. I gave up on driving for several months after that, but soon I would be graduating and I had plans to move to a larger, neighboring town. I really needed a license.

By the time I was ready to take another driver's test, the four-cylinder sub-compact had become a two cylinder trade in. My Mom had recently traded for a two-year-old Ford Maverick. Regrettably, car dealers weren't as fastidious in repairing small imperfections in their used vehicles as they are these days. The left turn signal didn't work. That was no problem, though. I knew how to use hand signals.

As the test progressed, it turned out to be opportune that I did know about hand signals because the examiner was having me make a surprising number of left turns. Finally we came to a stop light. The test was almost over. A left turn here would bring us back to the armory building. The examiner said, "Turn left."

For the last time, I stuck my arm out of the window, elbow bent and hand straight up. As the light changed, the examiner asked, "If I had told you to turn right, what signal would you have used?"

I was mortified. "I flunked again, didn't I?"

"Yes," he answered, "but I would have passed you if you had gotten this last hand signal right."

It was sometimes inconvenient the next few years to not have a license, but I had roommates and coworkers that were, for the most part, willing to get me where I needed to go. And when no friend was available, I walked or took a cab. Finally though, my last roommate had married and I was living on my own.

I decided to try one more time to get a driver's license. This time the January cold erased any worry about getting too hot. However, it had recently snowed a couple of inches and the streets were icy.

My Mom had traded cars again. Her new Ford Taurus was the first one to have an automatic transmission. It was something I was still unfamiliar with driving. Like the first time, the examiner told me to wait in the car. I figured it might be a good idea to have a look at the driver's manual while I waited.

That proved to be a very well-timed decision. Something I didn't know about automatic transmissions was to drop them from drive to first gear to slow them down when going down a steep incline or when stopped on an icy upwards incline. As it was, I had occasion to use both tricks on those wintry streets. When I pulled up in front of the armory, I asked the examiner, "Did I pass? " I was waiting for his usual answer, but he had a surprise for me.