Why Pro-life is NOT Pro Life: Shyflower.com

Why Pro-life is NOT Pro Life 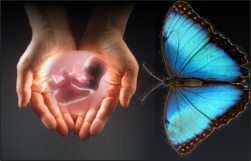 I wrote the poem Unborn after I miscarried my second child. Remarkably, the medical community calls miscarried fetuses "aborted," although it was nature's decision and not mine. The miscarriage remains one of the most horrendous experiences of my life. It left me with a profound feeling of loss that extended past the mental and emotional to a feeling of searing physical pain and emptiness.

The miscarriage left me with the understanding that abortion would never be a good choice for me. Even so, I believe the decision to end a pregnancy or carry it to term—yes or no—belongs solely to the woman it concerns and to nobody else.

Every now and then you find something really worthwhile on the Internet. Today I found this lovely explanation of the difference between pro-life and pro-choice from Jane MacElhenney in a comment on Facebook about Donald Trump.

"...he is not pro-life. He is anti-choice. Pro-life means more than protecting a clump of cells dependent on the woman. It means being sure those children are fed and educated and have access to quality health care. It means being pro the life of the pregnant woman and not co[-]opting her right to bodily integrity. Oh, no, these folks are definitely NOT pro-life. "

The term pro-life has been bastardized by a right wing that is hell bent on protecting those "clump(s) of cells." However, as MacElhenney goes on to say, these folks are not pro-life. They are anti-choice.

During the third presidential debate, Donald Trump described late-term abortions as babies "ripped from the mother's womb". I'm sure he meant it to be just as disgusting and inflammatory as it sounds, but it isn't true. His description is beyond disgusting. It is repulsive.

Today I found this account of a late-term abortion from a brave woman named Alyson Draper who had to have one. It was one of the most painful decisions she has ever, or possibly will ever have to make. In a public post on Facebook, she says:

I HAD A LATE TERM ABORTION. IT IS NOTHING LIKE DESCRIBED BY TRUMP. PLEASE DON'T BASE YOUR VOTE ON THE FEAR MONGERING HE...